Moving to a new city for a new job is a good time for reflection and an opportunity to make some adjustments. I’ve done that, and it turns out it’s all boiled down to one word: prioritisation.

I tend to fill my life with a lot of stuff; too much, by some accounts. So I stopped and asked myself

Where can I be most effective and make the biggest difference to both myself and others?

Where I felt I wasn’t investing sufficient time in something, I made the tough call of whether to spend more time on it and sacrifice something else or just stop doing it.

An example: a friend and I have been running a server since our university days for a bunch of people to host websites and email. This harks back to an era when you couldn’t rely on an ISP to handle your email and when GitHub pages was but a twinkle in its founder’s eyes. It generally ticks along quite nicely but there are times when it needs attention, be it routine maintenance or something more urgent. To give it the attention it deserved, and reduce our stress levels by reducing the urgency of any problems, we’d have needed to do a bunch of work to add some redundancy. There are many folks doing all this much better than we can, so we’re turning it off. A tough call but the right one.

That exercise was all well and good, but what about keeping an eye on how I’m spending my time on an ongoing basis to stop things piling up or not focussing on something I want to be? For that I’ve got a couple of tricks.

I set up a quarterly reminder in my calendar called “checkpoint”. When it pops up I know it’s time to spend a little time in the next week or so reflecting on what I’ve been up to and whether I want to change that. I’m finding every three months to be a good frequency: it’s not so often that I’m constantly checking up on myself but it’s often enough that the period is still fresh in my mind. Day-to-day I’m thinking less about long-term and focussing on the now, safe in the knowledge that every few months I’ll take about half an hour to think about what I’m up to. It’s like a trek in the mountains: you’re not looking at the map the whole time (or shouldn’t be). You know where you want to go and every so often you pull out the map to check you’re on the right path, spending the walk soaking in the beautiful scenery rather than staring at the map the whole time. Ok, terrible analogy over.

I learnt the second trick from a TED Talk by Laura Vanderkam on time management. It compliments the checkpoint idea by deciding a set of weekly priorities. I was already doing that on Friday afternoon at work, reviewing things in my “next” bucket (in the context of Getting Things Done, see below), but this includes my personal life in that process. I have a Google Keep sticky with the handful of things I want to focus on next week; three to five things in each of three lists: me, relationships, and work. Here’s one from a few weeks back: 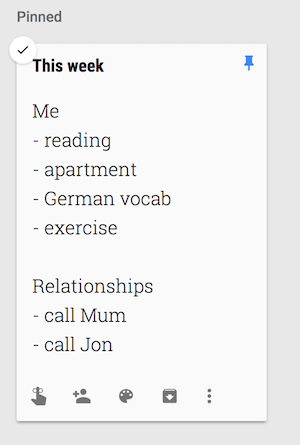 Priotisation works but there are so many distractions vying for my attention. I’ve done a number of things to reduce that.

The biggest is trying, once again, to adopt a Getting Things Done approach. At work I use GMail, and I’ve found a good way of using it for both email and tasks. I’ve used various task lists in the past but I’ve always tired of them quite quickly. I shudder to think what’s lurking in Wunderlist, Remember the Milk, and the so many more I forget the names of. The beauty of this approach is that it actually brings everything together into one place. I’ve realised that $taskapp never stuck because it was always missing a huge chunk of my to-do list in my inbox. It was a pain to keep adding tasks like “Reply to Bob”, so there would effectively be two lists. Making my email the focal point and putting other tasks in there (with a neat calendar reminder trick) fixes that. I still have the occasional wobble and find myself reverting to old habits but I’m getting better. I’ll save the detail on GTD for another post as there’s too much to go into here.

A zero-tolerance policy on marketing emails. Instead of just archiving, I hunted down the unsubscribe link and did so. It proved very effective: my personal email went from a signal to noise ratio of maybe 1 in 20, to about 3 in 4. Whilst it didn’t take long to process those 19 spamish mails, it’s all clutter that you don’t need.

Again, aggressively ditch them. Turn off email notifications. That app that’s too attention-seeking? Block its notifications or uninstall it. I’m still figuring out whether to block notifications from messaging apps, see below.

Reduce the stress in feeling an obligation to reply instantly. I know it’s a midguided obligation: people don’t expect an immediate response, but I often felt one. “Instant” in the name just means that messages can be sent instantly; there doesn’t need to be an instant reply. I’ve turned off “last seen time” and read receipts and found that really helps.

I’ve mentioned this to a couple of friends and it’s come up how some of it sounds a lot like mindfulness, and I agree. Although each bit may seem quite obvious, I’ve found the cumulative effect really helpful as a way to make sure I’m doing the things I find important to me and be able to really focus on the now, safe in the knowledge that every so often I take some time to reflect on what I’m up to. I’m always looking for other ways to improve on it, so let me know if you’ve got any tricks.